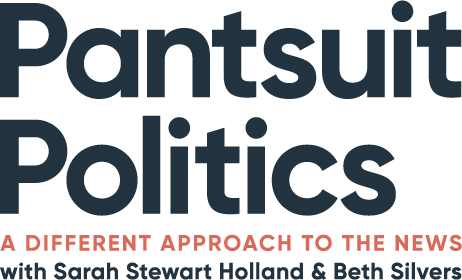 Building Relationships and Community Amidst Division

Beth and Sarah share their 10 principles for better political dialogue in these contentious times based on their book of the same title. In this talk, they emphasize the value of prioritizing relationships over policies. They talk about how we aren’t looking to create one good conversation; we’re building genuine connections that allow us to influence others and to be influenced by them Also, they discuss the importance of curiosity and how to build and maintain your own sense of interest in others.The discussion includes the balance between being an engaged, informed citizen without allowing politics to become all-consuming.

SARAH STEWART HOLLAND AND BETH SILVERS host Pantsuit Politics podcast, featured in the New York Times, the Atlantic, and named by Apple Podcasts as one of the Best Shows of 2021. They are also the authors of I Think You’re Wrong (But I’m Listening): A Guide to Grace-Filled Political Conversation (2019), which was featured on MSNBC’s Morning Joe, received starred trade reviews, and continues to be in demand with readers, book clubs, and libraries. Sarah and Beth speak frequently to universities, businesses, and civic organizations about improving political dialogue.

Both Sarah and Beth attended Transylvania University in Lexington, Kentucky, and then received their Juris Doctors (Sarah from American University and Beth from the University of Kentucky). Sarah began her career as a congressional staffer, campaign aide, and blogger and social media consultant. She lives in Paducah, Kentucky, where she served a term as a city commissioner and volunteers as a Court-Appointed Special Advocate for children.  Beth has practiced law and served as an human resources executive and business coach. Beth lives in Union, Kentucky, and serves on several local boards of directors. Sarah shares life with her spouse, Nicholas, and children Griffin, Amos, and Felix; Beth with her spouse, Chad, and children Jane and Ellen. Sarah’s dog, Cookie, and Beth’s dog, Lucy, are beloved (and involuntary) contributors to their work.

MC students, faculty and staff may attend for free.

Witherspoon Lectures are possible due to a generous Endowment from Newell and Mary Witherspoon. The Witherspoons, longtime residents of Huntsville, Alabama, were motivated to endow a series that would support the mission and build the reputation of the College by bringing interesting and thought-provoking speakers and artists to campus.

The purpose of the lecture series is to strengthen relationships between members of the campus community and also between the campus and the wider region by creating opportunities to learn about and discuss topics that are important, timely and of broad interest