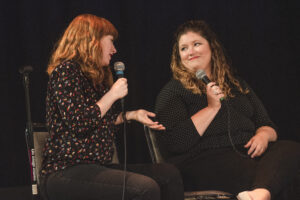 The hosts of a popular podcast dedicated to “grace-filled political conversations” will speak at Maryville College in February, thanks to the generosity and vision of alumni Newell Witherspoon ’52 and Mary Lee Witherspoon ’56.

Sarah Stewart Holland and Beth Silvers, the voices behind the widely acclaimed “Pantsuit Politics” podcast, will help attendees engage in better political dialogue in a Feb. 7 address titled “Building Relationships and Community Amidst Division.” It is scheduled for 7 p.m. in the Ronald and Lynda Nutt Theatre of the Clayton Center for the Arts.

“Building Relationships and Community Amidst Division” is the inaugural presentation of the Newell and Mary Lee Witherspoon Lecture Series, which the alumni couple established through an endowment earlier this year. The Witherspoons, longtime residents of Huntsville, Alabama, were motivated to endow a series that would support the mission and build the reputation of the College by bringing interesting and thought-provoking speakers and artists to campus.

The purpose of the lecture series is to strengthen relationships between members of the campus community and also between the campus and the wider region by creating opportunities to learn about and discuss topics that are important, timely and of broad interest. Events and guest speakers will strive to express the value of differing views, while seeking common ground and acknowledging the dignity in all.

Named one of Apple Podcast’s Best Podcasts of 2021, “Pantsuit Politics” has a large following, with more than 20 million downloads since launching in 2015. Today, it reaches tens of thousands of listeners each month and has been featured in the New York Times and The Atlantic.

The hosts, native Kentuckians Sarah Stewart Holland and Beth Silvers, met while enrolled at Transylvania University in Lexington. They each have law degrees (Holland from American University and Silvers from the University of Kentucky), and frequently speak to people at universities, businesses and civic organizations about improving political dialogue.

The pair have authored two books, 2019’s “I Think You’re Wrong (But I’m Listening),” and this summer’s release, “Now What? How to Move Forward When We’re Divided (About Basically Everything).” Both books aim to help people build and maintain relationships in a polarizing political climate.